(Disclaimer: It is not my goal to diminish the problem. Aggressive behaviors are not acceptable in our society and showing them can have serious consequences for the dog and their owner, as well as for the victim. Living with an aggressive dog can also cause a lot of stress and anxiety for the owner. It might be a good idea to see a therapist yourself!)

“Aggression” is one of the most frequent reasons for seeking out professional help.  Basically, any strong reaction (barking, lunging, snapping) in any context can get labeled as “aggression” and people usually assume bad intent behind it.

While some dogs certainly aim to bite, many – if not most – show aggressive behaviors simply in order to get more space. When dealing with any kind of problems, it is important to separate our narrative from the facts. This post’s goal is to look at some common misconceptions about aggression, which may be clouding our judgement.

This part focuses on what aggression is not. Read part 2 to learn how aggression can be defined and analyzed.

Aggression is not anger

When talking about aggression people often equal aggression with anger (as defined in our society).

There are two problems with this.

Second, these emotional labels inevitably take the focus away from the dog and the environment and the whole thing is suddenly about our emotional response. It creates a negative mindset, making precise analysis of the situation difficult.

Of course witnessing aggression is distressing but if we want to effectively help our dogs, we need to learn to take a step back from the situation. 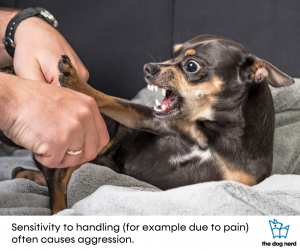 Aggression is not a character trait

Many dogs show aggressive behaviors only in specific contexts:

Are these dogs aggressive? Would you be concerned about your own safety just because your dog shows any of the behaviors above?

Of course, we can label a dog “aggressive” but we should agree on the definition first. For example I would label a dog aggressive if many things, in many different contexts elicit an aggressive response from them, if barking/snapping/lunging has become their “go-to” response in situations they can’t handle. Your definition might be different.

Aggression is not abnormal

Aggressive behaviors are part of the ethogram of virtually any species. Often they are problematic in our life with dogs but it does not mean they are abnormal. Aggressive behaviors usually start out of stress and/or discomfort (so called fear aggression), but some breeds were selected for high levels of aggression – can you imagine a police dog who backs off if the suspect is too scary?

Treating aggressive behaviors as something “wrong” (“he has no right to growl at me!”) is not just unfair to the dog, it’s downright dangerous. Dogs can’t talk, they only have their body language to communicate with us. You may punish or ignore the growl, but if the dog bites you, you will take your hand away, thus teaching them that biting is an effective strategy to apply in a given situation.

(A pro tip: if your dog is biting, get professional help. Even small dogs can be dangerous!) 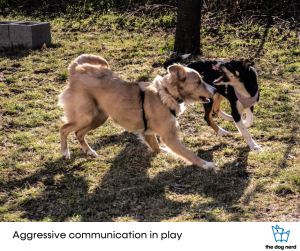 Aggression is not predation

First of all, by now we know that the neurologic processes happening in the brain during an aggressive response and during predation are totally different!

Predatory behaviors are highly rewarding to dogs – that’s why we see compulsive ball chasers and also why we use toys a lot in training.

Attention! Even though predation is not the same as aggression, it can be extremely dangerous! If your dog is showing predatory behaviors towards small animals or children, manage your dog carefully and seek professional help. 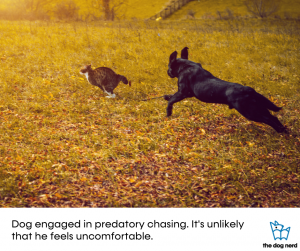 This part focuses on what aggression is not. Read part 2 to learn how aggression can be defined and analyzed.